From Bremen to Houston to Alberta

Team of logistics providers successfully move huge oil and gas project to destination.By Peter A. Buxbaum, AJOTHouston is a port that is known for handling a great deal of project cargo, much of it exports of locally manufactured oil and gas exploration and drilling equipment. But it might not be the first port that comes to mind for delivery of European oil and gas project cargo destined for Canada.
But that is exactly where nine convection banks landed in November of last year for delivery to a site in Alberta, Canada. In fact, for a variety of reasons, Houston is the start point in a corridor running down the middle of the North American continent that is used for the specific mission of delivering project cargoes to Canada.
The mammoth job was successfully completed thanks to the teamwork displayed among several different companies. LS Cargo Logistics GmbH, a freight forwarder and logistics services provider based in Bremen, Germany, coordinated the entire move on behalf of the manufacturer, also a Bremen-based company. Both the manufacturer and the consignee have requested not to be identified in this article.
Albacor Shipping, Inc., a Toronto-based group, coordinated the transportation on the North American side. The shipments were unloaded at Houston’s Texas Terminals and then trucked to Alberta utilizing specialized equipment and trucking services provided by Westfreight and Totran, both Canadian truckers, and Contractors Cargo, a Los Angeles-based trucking company with an office in Houston. 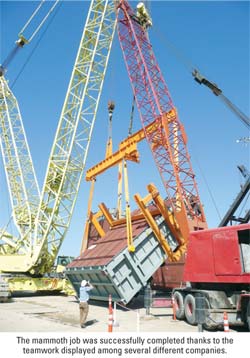 The nine shipments that arrived in Houston in November 2008 and made their way from Houston to Alberta ranged in weight from 194,000 pounds to over 400,000 pounds and topped out at over 20 feet tall and over 200 feet long. The shipments took as long as 10 weeks to reach their destination, according to Charles Rollins, director of Contractors Cargo, Inc.
LS Cargo Logistics is a privately owned company that operates worldwide. The company offers services that range form feasibility studies to tailor made solutions for international projects. Moving project cargo is considered to be one of LS Cargo Logistics’ core businesses, according to Dirk Röthig, a managing director in LS Cargo Logistics’ Ratingen, Germany, office.
The shipments originated near Bremen, where took charge of coordinating the moves. “We were the overall contract partner,” he said. “We were awarded the contract by the customer and were responsible for the transportation all the way through.”
The equipment being shipped, convection banks which are involved in the heat exchange process that allows oil and has to be extracted form the ground, was produced close to Bremen at a construction facility that has its own berth. “We chartered a vessel and the equipment was loaded at the supplier’s berth close to Bremen,” said Röthig. “The vessel was self geared but for this loading we needed to use specialized local cranes that were brought in to do the job.”
Albacor Shipping received the contract from LS Cargo Logistics to coordinate the moves on the North American side. “Albacore was our contracted partner in North America,” said Röthig. “They received the contract from us.”
Albacor is a global logistics and transportation provider with locations in Toronto, New York, Montreal, Charleston, Los Angeles, Calgary and Houston. Albacor Shipping also specializes in the handling and logistics of industrial and machinery projects. Both Albacor and LS Cargo companies are members of the World Wide Project Consortium (WWPC).
The port of Houston was chosen for unloading as a result of a feasibility study undertaken by LS Cargo Logistics on behalf of its client two years ago. “Because of the size of the modules there wasn’t any way to truck them through Rockies from Vancouver or Tacoma,” said Ole Dammann, a project manager at Albacor Shipping. “The route from Montreal is also more difficult.

Peter Buxbaum has been writing about international trade and transportation, as well as security, defense, technology, and foreign policy, for over 20 years. Besides contributing to the AJOT, Buxbaum’s work has appeared in such leading publications as Fortune, Forbes, Chief Executive, Computerworld, and Jane’s Defence Weekly. He was educated at Columbia University.

It is the “uncontained” shipments that draw a lifetime allegiance of purveyors of the business. As one MPV (Multi Purpose Vessel) analyst bluntly said as an aside, “Boxes are boring.”